Meeting with an Angy Young Man

An excerpt from my diary of 1983 stated ‘Tonight I am to meet Colin Wilson, one of my favourite authors.  Feel quietly excited at the prospect.  I’m to meet him at his ‘gentleman’s club’ at 5.00pm in St. Austell.  It will be wonderful to meet a man who has in many ways helped to shape my own ideas since I was twenty five years old.’ 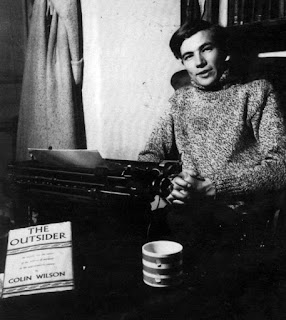 That year I was holidaying with my husband and two children at Trevarrick in .   I had corresponded with Colin Wilson for some years since reading his thorough and embracing work in Mysteries and The Occult. These were my favourite books at that time because I was young, less cynical and into pondering life’s mysteries.  Those two books in particular from his large and interesting ouevre, opened my eyes to many other books, writers and ideas and I can truly say that they helped shape my beliefs.  Colin was just developing his Faculty X theory which tuned in with many of my own explorations.  I began to write to him and it was a period in his own writing life when he was feeling a trifle beleaguered and put down by press and critics.  His sudden and astonishing literary rise began way back in 1956 when he published his first and perhaps most iconic book, The Outsider in which he explored the feelings of those alienated from life and society because of their genius or philosophical thoughts. This shot him to overnight fame but almost as speedily the book suddenly seemed to lose its appeal and critics clambered to back track on their first laudatory reviews as if they had committed some crime in good taste.  But this insightful and intelligent book is still widely read to this day and for a young self-educated man was a remarkable achievement at that time.  For some inexplicable reason, it was at this time that Colin Wilson earned himself the label of Angry Young Man, joining the likes of the dramatist, John Braine, and others. Well, what a misnomer that turned out to be.

It took some time to find the ‘gentleman’s club’ which was down a little alleyway close to an Income Tax office.  As it happened St Austell boasted two income tax offices for some reason so one person would direct me one way and then another passer by would point out the opposite direction.  I was almost ready to despair but at last found the club.  The plump blonde barmaid assured me I was in the right place and when I asked if Colin was there, a gentleman in a corner said he’d be there soon, he’d just gone to Tesco’s to shop.  My hero shopped in Tesco’s; how mundane!

At last Colin’s young son Rowan arrived with Hetty his grandma, a frail, small old lady.  Colin turned up at last wearing a light blue suit, a white hat and carrying an umbrella.  He was tall and ungainly, an odd but interesting looking person with a sweet, youthful, boyish face and cheerful smile.  His voice was cultured but with a slight trace of the accent of his youth. We had a wonderful conversation about philosophy and writing though it was hard work competing with the very extravert and noisy company that gathered about us.  I was to find out that Colin was always surrounded by a crowd!  The whole atmosphere was natural and free and we bandied around many subjects such as sexuality, crime, no holds barred, no prudery.  I wasn’t used to this even in the Eighties and it felt so liberating and delightful. One of the interesting ideas Colin had dreamt up was that a machine might be invented that could blend men and women together in order to have the perfect sexual union.  Still not too sure how this was meant to work but I had consumed a great deal of by then and it sounded rather fun.  During the conversation we tackled Kazantzakis, another of my favourite and influential writers.  Colin asked the company for advice on a new novel in which a Polish sailor feigned illness in order to get out of the navy.  I wonder if that novel ever got written?
Colin offered to drive me to where we were staying but I was meeting the family and we were going to the pictures so he invited all of us over to tea next day.

Colin’s home was hidden well away down the country lanes so we had some trouble finding this as well but that’s for you; a maze of lanes and twisting byways.  But again, we found our way somehow and had a splendid and welcoming day with the ’s.  His youngest son whisked my own lad upstairs to play at computer games while my daughter was regaled with cakes and cherryade.  We had several glasses of wine and listened to Colin’s fascinating accounts of Jack Tregeagle who had to empty Dozemary Pool with a cockleshell that had a hole in it and other amusing tales; he is a great and entertaining raconteur. But, as a writer myself, it was the visit to Colin’s glorious, untidy, wonderful den that thrilled me most.  The walls were literally lined with books; in fact the whole house was lined with books, probably the loo too!  One shelf was filled with the books he had written himself. He has a personal library that has grown over the years and now occupies many sheds in the garden, much to his wife’s dismay. But what a treasure trove!  I hope he leaves all the books to the nation. 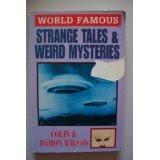 Colin presented me with a part of an mss which I still possess and liberally gave us many of his own books which he signed, plus two rare books (of which he possessed two copies) which I had searched for over the years in vain. I still have these books on my shelf in my own den.  His generosity was truly wonderful and heart warming.

natural, straightforward, honest and down to earth. Angry young man?  I don’t think so.
Posted by Loretta Proctor at 2:47 AM 1 comment: