Could this work for Greece? For all of us?

Because Greece is my mother's country and I have friends and relations over there, I have a special interest in its fate.  Just as I have in Egypt because that was where I was born. Both my beloved countries are so beleaguered and in chaos, teetering on the brink of anarchy.
Today I read about a Greek woman who stated that if the worst came to the worst and there was no food, if people mugged one another on the way from the supermarket and lawlessness became endemic, she would return to Paros where she had a small plot of land.  She would grow tomatoes and corn and live off the land as Greeks have always done. 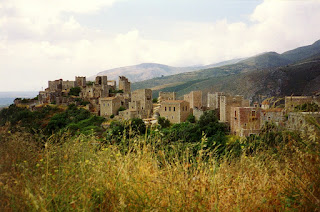 Some time ago, Joanna Lumley did a programme on Greece where she visited the Mani.  The villages were deserted, the young ones all left to go to the cities to find work, bored with tradition and the small life of the village.  It isn't only Greece where villages have been abandoned by the young.  It's happened in Spain, Italy and many other places.  But now there is no work in the cities. Work, such as it is is poorly paid and unrewarding and one wonders, is it really so much happier in the city?  My solution is, as all idealistic solutions, so simple.  Why don't the young ones return to the villages, start new communities, till the land as they once did and manage with a simple but infinitely more rewarding lifestyle.  They can dance in the village squares, laugh in the tavernas, meet each other in safer, normal ways, not via the Internet and other dodgy outlets.  They can feed themselves and live healthier lives.  We once were self sufficient in England but no more.  We all relay on supermarkets and become accustomed to foodstuffs from foreign sources. 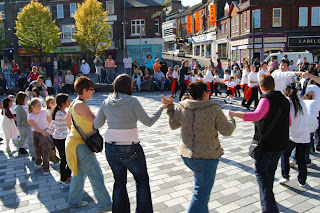 Okay, I'm being naive.  The young will cling to their new lifestyles and say it's all so much more fun despite everything.  They will say, the old village life was restricting, claustrophobic and old fashioned.  Or will they?  Just now they seem to me full of despair and confusion.  Life seems meaningless for so many just now.  Returning to the empty fields and villages may be the only way for the Greeks to survive the terrifyingly bleak future.  Things must change and it is always the young who have the energy and passion to change.  Those of my age just look on and feel sad but maybe this is how the older ones felt at the start of World War Two.  They had to watch it unfold before them, see the young suffer and fight to change things.  Maybe it's always the same.  There certainly seems to be a cycle of crisis that engulfs Europe every now when old systems must be broken down, ruins must be demolished in order to build something new and flourishing again.